There’s nothing better than a gooey, fudgy, chocolatey brownie when dessert cravings strike, but sometimes you just want to indulge immediately. Rather than baking brownies from scratch, you can make better tasting boxed brownies with a few ingredient upgrades. No one will ever be able to guess they’re not homemade from scratch!

Why these are the best box brownie hacks around

Most boxed brownie mixes call for eggs, water and oil in order to bake them, but they simply never taste homemade unless you make some simple ingredient swaps. While there are many options that we’ll talk about shortly, some of the very best ways to make boxed brownies taste homemade are to use:

Here are a few of my favorite boxed brownie hacks you have to try!

My favorite boxed brownie mixes are:

Some other great gluten free options are:

Use chocolate milk instead of water

The extra fat from the milk adds a richer flavor to the box brownies and using chocolate milk simply ups the chocolate ante. Another great box brownie hack is to use coffee or red wine in place of water.

You have a few options when it comes to this box brownie hack. Most brownie mixes call for 2 eggs. You can either add the two eggs plus an additional egg yolk to make ultra fudgy brownies or you can use 4 egg yolks for the ultimate in fudgieness. It is important to note that 2 egg yolks are the equivalent of 1 whole egg.

Substitute Butter Instead of using oil

Oils like vegetable & canola oil are really bad for you, not to mention they can be damaging to the gut. Instead of using oil, make better box brownies by substituting the oil with butter. They’ll taste richer and will make your box brownies taste homemade. You can also really up the ante by browning your butter before adding it to the brownie mix for delicious brown butter brownies!

Adding flavor enhancers like vanilla extract and espresso powder may not seem necessary to make box brownies taste homemade, but these simple ingredients really punch up the chocolate flavor, making for a richer, more delicious brownie.

Another great box brownie hack is to add texture to your brownies from add ins like chocolate chips, pretzels, peanut butter cups, oreos and even potato chips!

Want to make some brownies from scratch?

If you’re ready to try baking brownies from scratch, here are a few recipes you’ll definitely want to try:

Did you have a chance to make this recipe? If so, please leave me a rating and review below. I always love and appreciate hearing from you! 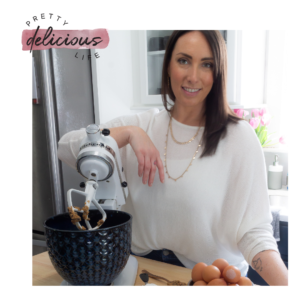 “In late 2017, after almost a decade of chronic pain, fatigue, inflammation, exhaustion and a slew of doctors, I was diagnosed with SIBO and adrenal fatigue. SIBO, or Small Intestinal Bacterial Overgrowth, occurs when there is an imbalance in the gut. I have since adopted a low FODMAP diet and have been creating recipes that accommodate my personal dietary needs while remaining delicious crowd pleasers.”

We use cookies on our website to give you the most relevant experience by remembering your preferences and repeat visits. By clicking “Accept”, you consent to the use of ALL the cookies.
Cookie settingsACCEPT
Manage consent

This website uses cookies to improve your experience while you navigate through the website. Out of these, the cookies that are categorized as necessary are stored on your browser as they are essential for the working of basic functionalities of the website. We also use third-party cookies that help us analyze and understand how you use this website. These cookies will be stored in your browser only with your consent. You also have the option to opt-out of these cookies. But opting out of some of these cookies may affect your browsing experience.
Necessary Always Enabled
Necessary cookies are absolutely essential for the website to function properly. These cookies ensure basic functionalities and security features of the website, anonymously.
Functional
Functional cookies help to perform certain functionalities like sharing the content of the website on social media platforms, collect feedbacks, and other third-party features.
Performance
Performance cookies are used to understand and analyze the key performance indexes of the website which helps in delivering a better user experience for the visitors.
Analytics
Analytical cookies are used to understand how visitors interact with the website. These cookies help provide information on metrics the number of visitors, bounce rate, traffic source, etc.
Advertisement
Advertisement cookies are used to provide visitors with relevant ads and marketing campaigns. These cookies track visitors across websites and collect information to provide customized ads.
Others
Other uncategorized cookies are those that are being analyzed and have not been classified into a category as yet.
SAVE & ACCEPT